Posted by Gvanta in Outfits Sonia Rykiel is a French fashion designer who became famous almost by accident! Sonia never planned to be a fashion designer, but after marrying a man who owned an elegant clothing boutique, she designed one sweater to be sold in his store. By chance, an ELLE magazine editor saw Sonia Rykiel’s work and decided to feature Sonia’s design on the cover of ELLE. Sonia became known as a trend-setting knitwear designer!

Sonia Rykiel was the first designer to put the seams on the outside of her clothing, and she was also the first to print words onto knitwear! Not long after she was “discovered” by ELLE magazine, Sonia opened a boutique in Paris of her own!

Would you believe that Sonia Rykiel has been designing clothing for over 40 years!? Sonia’s designs still feel youthful and flirty. I bought the dress in Milan, where the Sonia Rykiel label has a beautiful flagship store. Sonia also has 25 retail stores in Paris and over 1000 worldwide! Sonia Rykiel is a lovely and talented woman; she now over 70 years old and still inspiring people in 2013!

With my cute cactus dress I wore a unique illustrated floral scarf by Braccialini, and black peep-toe sandals from Pretty Small Shoes. The silver charm bracelet I wore was bought as a souvenir when I visited New York, USA back in 2009! 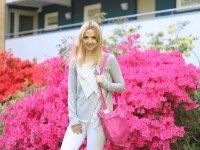